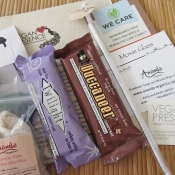 I have wanted to try a box subscription since first discovering them a few months ago. Though I would prefer a makeup based service, [hold the phone; just found out about the all-vegan True Beauty Box]. Last month I discovered Vegan Presence from Vegan Beauty Review (review here) while on the hunt for a vegan BB cream (Glow Time Full Coverage Mineral BB Cream by Jane Irarendale and Evenly Radiant BB Crème by eDerma, in case you are interested). The service has been shut down.

The box--actually a 100% biodegradable envelope--contains a letter printed on handmade, wildgrass paper listing every item in the month's package, further purchasing info and any available discount codes. 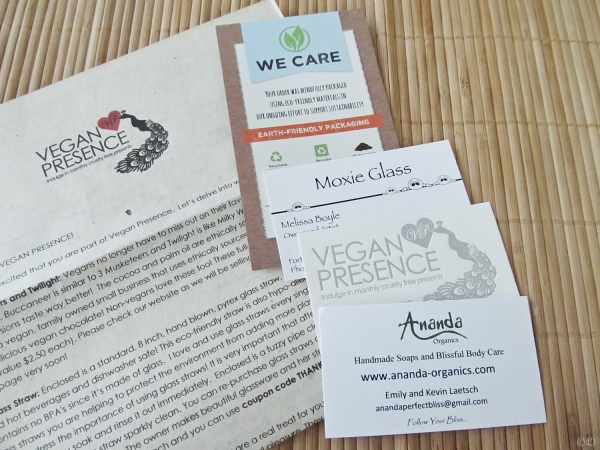 Papyrus! And on two of the three business cards! 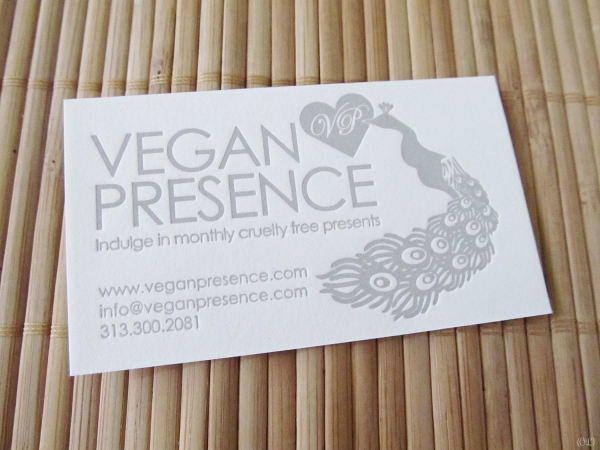 When I get a business, I'm gonna get me some awesome letterpress business cards, too.
All of the packaging is about being eco-friendly. I saved some of it for later use. 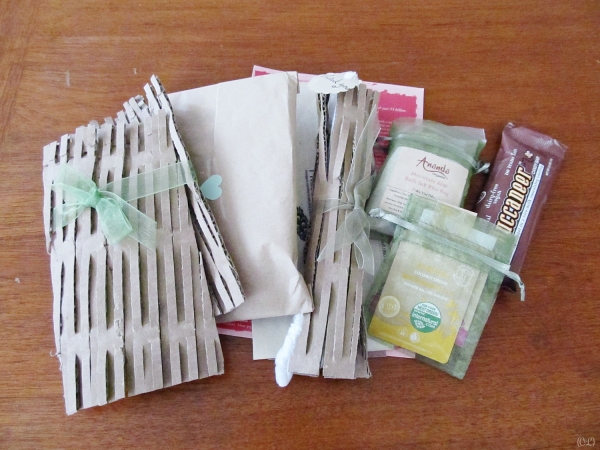 Only eco-friendly, sustainable, recyclable, biodegradable, and/or reusable packaging is used. 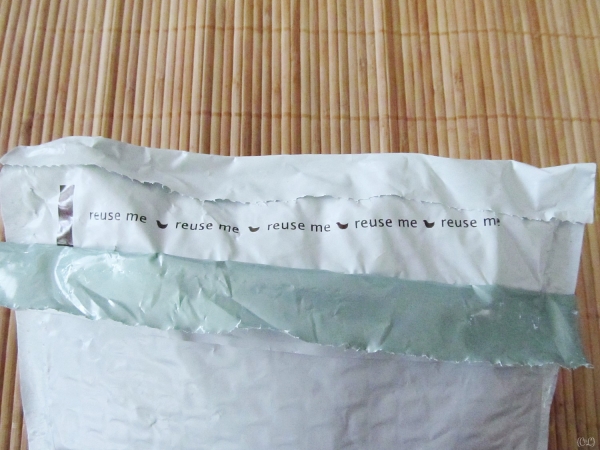 Also included was a pamphlet on veganism. I found the inclusion rather amusing, having been vegan for twelve years. I suppose it's for people who receive the Vegan Presence package as a gift.

I love the word buccaneer. I also like pirate movies. Let's move on before this gets more awkward. 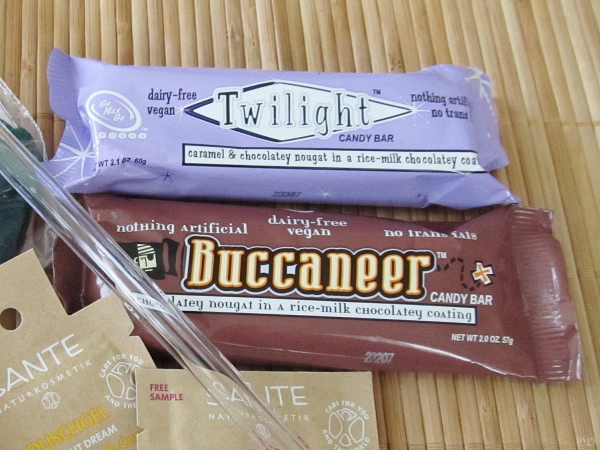 Three Musketeers used to be my all-time favorite chocolate bar in the days before I was vegan. I found The Buccaneers bar to be an excellent substitute. It really does resemble and--most importantly--taste like a Three Musketeers bar. Disclosure: I haven't had a Three Musketeers bar in over twelve years, so I could be off. The Twilight bar was also a good replication of a Milky Way bar, though I've never been overly fond of the original. But hey, it's chocolate. Would you think we're terrible parents if I told you my husband and I split both bars and didn't share any with the kids? I keep reminding myself that they don't like chocolate anyway (It's true). The candy bars are made by Go Max Go Foods. I definitely need to track these down online. The letter lists them at $2.25 each and that's a steal for vegan chocolate.

This bag o' salts is by Ananda Organics and retails for $3.49. It is a little cloth bag filled with Himalayan pink salt and rose petals. Roses are one of my favorite scents and this was heavenly. There is a nifty full size version with salts and rose petals layered in a glass jar available on the company's website.

I used this one a few nights ago. The bag of salts became an empty bag of salts nearly instantaneously. Nothing wrong with that, just a little surprised. While I like trying new bath and body products, I'm not sure I would purchase this in the future. Bath salt bags are pretty easy to make at home.

These glass straws seem to be making the rounds on the interwebs. It is an 8" hand-blown, Pyrex straw by Moxie Glass. I love the idea, yet on the other hand, part of my cringes when I think of them breaking. I developed a fear of glass after I went to the emergency room from a severe glass cut on my had. I'll spare you the details. It was over ten years ago, but I still have a long scar on my pinky.

The straw comes with a pipe cleaner. The contents of the box had shifted in the mail so I didn't understand why there was a pipe cleaner with a thank you tag included in the package. I have to admit that when I realized what it was for, I had a serious epiphany. Having a pipe cleaner handy would have been so nice for all of those thin little straws on cups and whatnot when my children were toddlers. Seriously, why did I not think of this sooner? 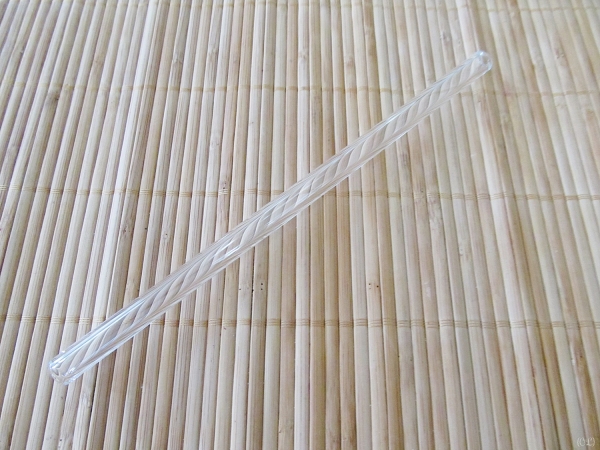 The straws retail for $2.25 and I am strongly considering purchasing more. There are also different colors available on the Etsy site, as well as straws with glass frogs on them (yes, frogs!) and bent versions.

There were two samples by Sante, a German skin care company, included in the package. 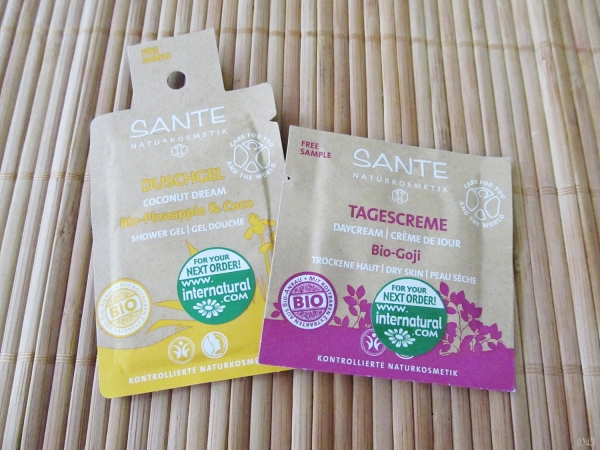 I thought they would come in handy while traveling and put them away for later use. They came with a 20% coupon code.

Last we have a holiday themed, catnip filled, felt shamrock toy for our cat, Oscar. It was made by an indie company on Etsy, called The California Chi. 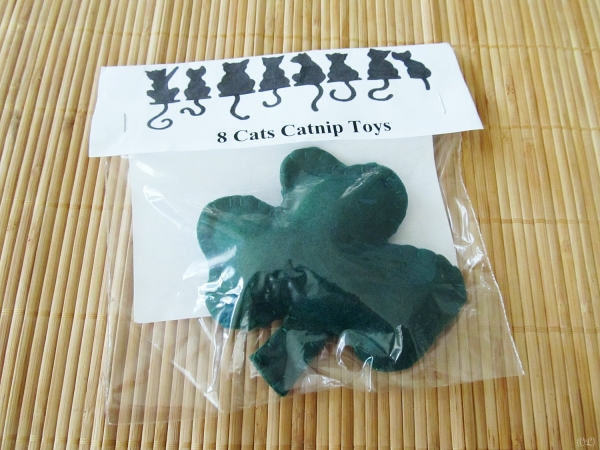 I took it out of the package and thought, "That's nice, but Oscar doesn't care for catnip". I showed my hubby what we received from Vegan Presence after he came home from work that day, but I couldn't find the cat toy. I knew I had left it on the coffee table with the rest of the items. I looked under the table and found this: 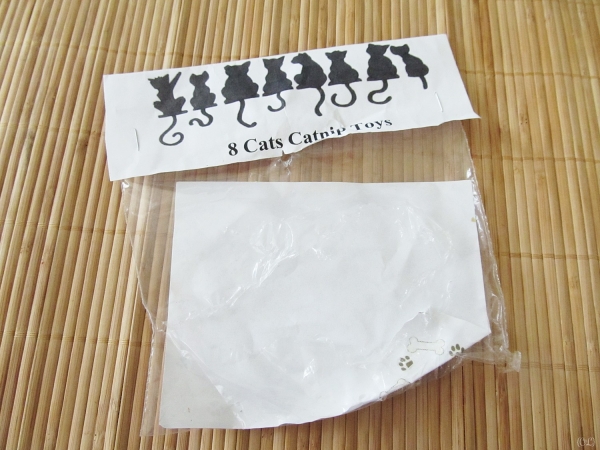 So I guess Oscar likes catnip after all. We've had him for about a year and a half and I've never seem him absolutely destroy anything. He also happens to be declawed (not our decision; his first owner had it done). So...kinda impressive.

If you add everything up, it comes out to $14.74 for a $15 monthly subscription rate. How you determine the value of the service is up to you. The monthly letter is transparent with prices, listing each retail value at the end of the item description. I'd like to try Vegan Presence a few more months before I make a final decision. I decided on Vegan Presence since it is a low risk for fifteen bucks. There are a couple of other vegan subscriptions that I would like to try in the future, notably VeganCuts for $20/mo. Stay tuned! April's box will be on its way soon.

This site uses Akismet to reduce spam. Learn how your comment data is processed.

Even though I'm on a no yarn buy, I couldn't resis

I finished cross stitching this in August, but jus

Spent the day doing some low immersion dyeing on e

New crochet book for me! I've wanted it for awhile 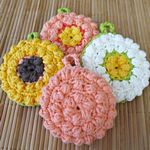 All blog content and images are the intellectual property of Cedar&Linn, except where noted.

We use cookies to ensure that we give you the best experience on our website. If you continue to use this site we will assume that you are happy with it.AcceptPrivacy policy