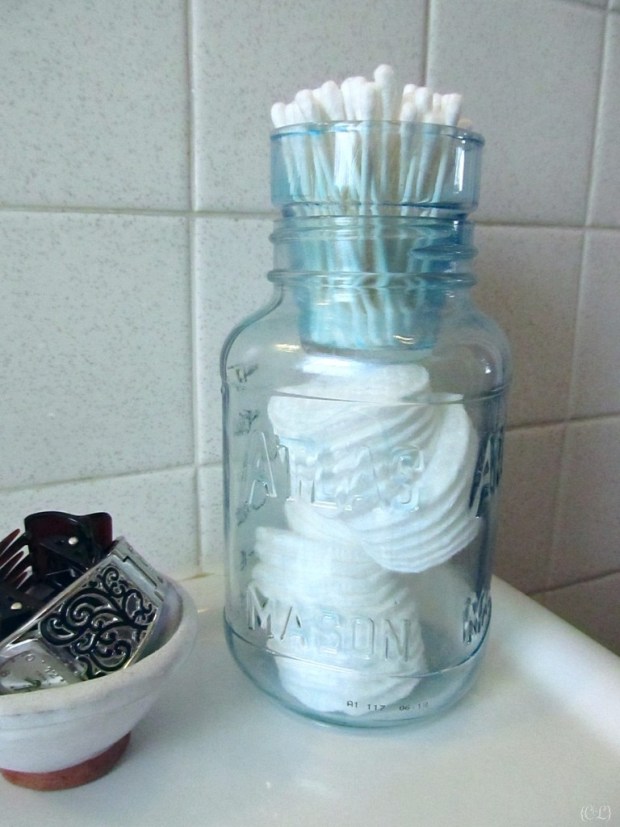 You can't scroll three inches without seeing a tinted mason jar pin on Pinterest. Then again, who doesn't love the idea of a beautiful blue mason jar? Or perhaps a whole lot of pastel tinted jars? Or maybe some crazy glitter jars are more your thing. I was intrigued by the idea, dutifully pinning several different versions of mason jar tinting to my Pinterest board, filing it away in my head of something I was definitely going to do. In the future. Some six months later, I got around to Michaels and purchased some glass paint. Bear in mind that, according to Pinterest, there are several ways to tint mason jars. Tinting Mod Podge with food coloring seems to be the most popular way. Personally, I think people expect too much from Mod Podge, so I went with a product actually designed for tinting glass. I think I was inspired by the DIY Aqua Mason Jars pin.

I wanted to make a cotton ball/swab holder with a mason jar and a little flower pot shaped candle holder. I got the idea when I placed an errant candle holder filled with toothpicks in a mason jar. This was in the kitchen, but I liked how the two fit together and thought it would work well for the bathroom.

There are a bunch of different glass/ceramic paints out there in the craft store wilds. I bought one specifically labelled as transparent glass paint. Depending on the project, you can paint either the inside or outside of the jar. I decided to paint the inside. If I recall, my reasoning was that the exterior could get damaged/scratched more easily. With my amassed Classico pasta sauce jars around me, all that was left was to start painting. I'll just mention that it's not easy painting the inside of a regular mouth jar. I tried using both a foam brush and a paint brush, but both resulted in severe streaking. I tried to let the paint dry for a bit and do a second coat, but...no. That does not work. The paint clumps even more because it takes too long for the paint to dry completely. After I gave up, I put them in the basement to dry. The paint bottle said to let them dry for four days. About two and a half months later, I baked them (true story). I didn't really think about what I was doing and just placed the jars and candle holders directly on the oven's wire racks. Don't do this. Put them on a baking sheet. I was lucky the glass didn't explode from uneven heating. I hoped the paint would even out after baking, but no luck. Now that I look at the original pin, I notice some major streaking action that should have served as a warning. Alas, that is what happens when one does not refer to the pin before starting a Pinterest Challenge. And tada! 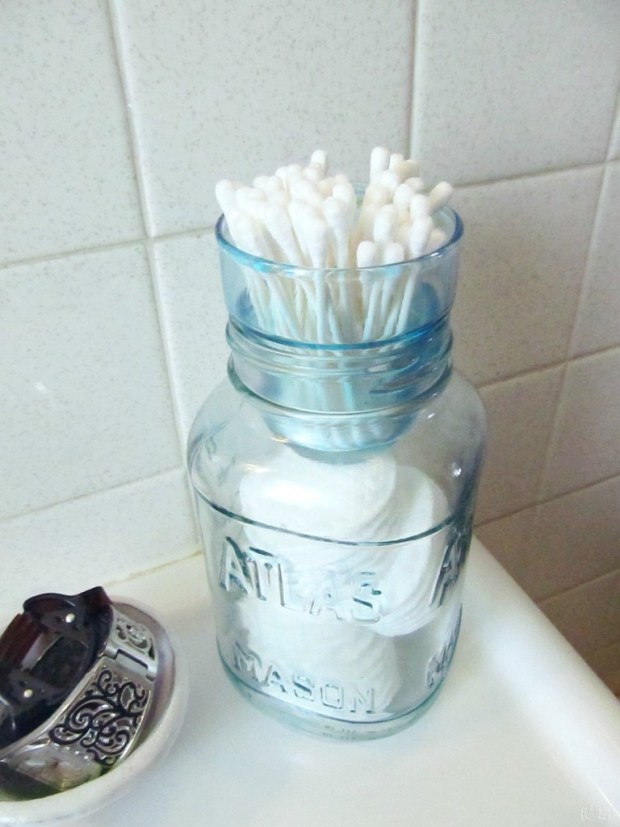 The mason jar now sits on my bathroom counter. Even my husband thought it was nifty. The paint streaking isn't so obvious at a distance, but it's still noticeable up close. I haven't figured out what to do with the other jar/candle holder set. Next time I think I will pour the paint into the jar, swirl it around, then pour it back into the original bottle. Sounds messier, but it just might do the trick.

This site uses Akismet to reduce spam. Learn how your comment data is processed.

All finished! Swipe to see the colors used for thi

This little guy is stitching up faster than I expe

Shawl update. It's coming along, but there a lot o

Finished the bag. This is based on the Granny Squa

All blog content and images are the intellectual property of Cedar&Linn, except where noted.

We use cookies to ensure that we give you the best experience on our website. If you continue to use this site we will assume that you are happy with it.AcceptPrivacy policy